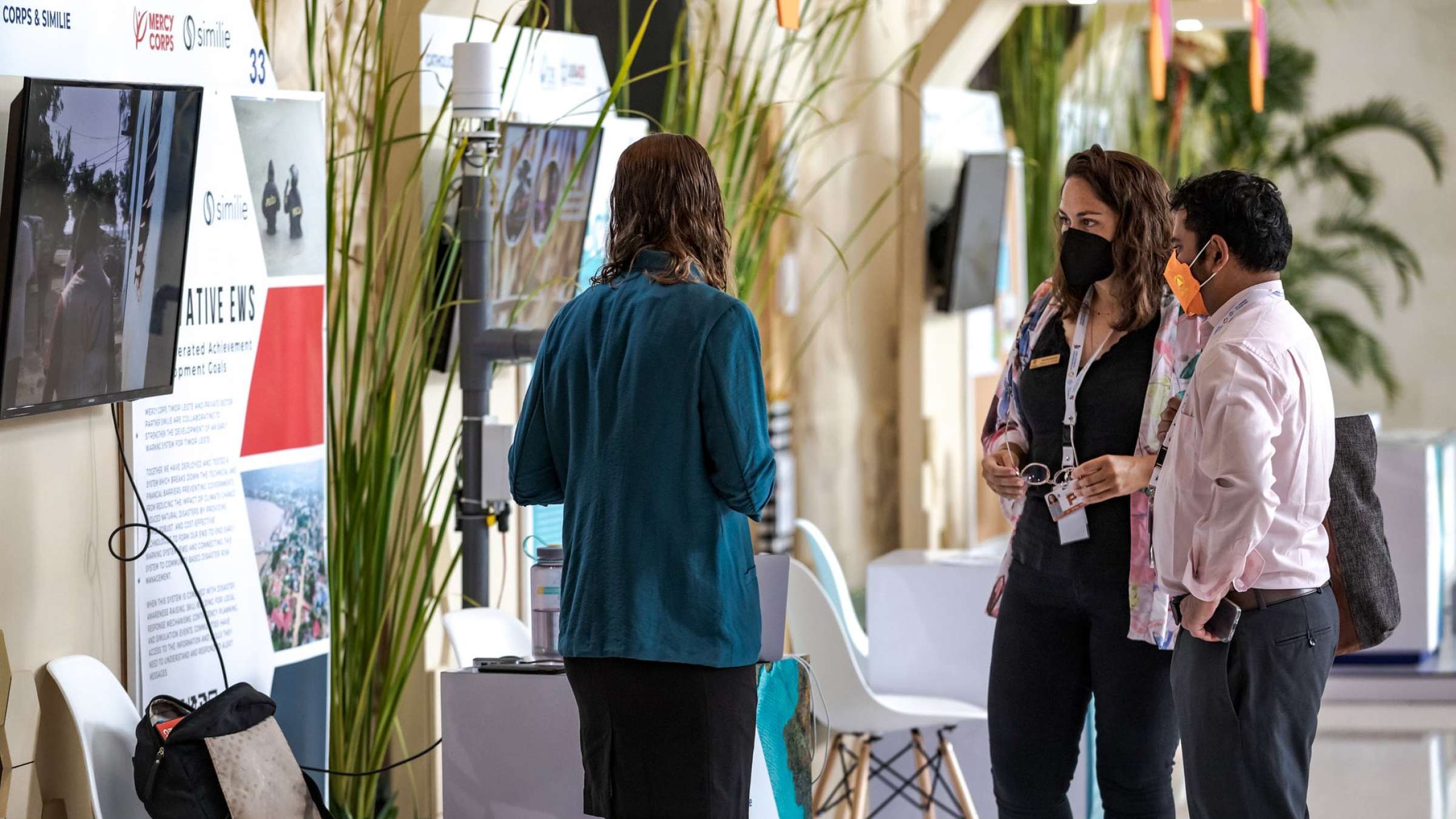 The 2022 Global Platform for DRR brought together the DRR and climate communities around a concrete goal: finding solutions to scale up climate adaptation. And several early warning initiatives showed interesting parallels in taking this agenda forward.

The seventh session of the Global Platform for Disaster Risk Reduction (the Global Platform) took place from 23 to 28 May 2022, in Bali, Indonesia, co-chaired by the Government of Indonesia and the UN Office for Disaster Risk Reduction (UNDRR). It was the first global gathering for disaster risk reduction (DRR) actors since the COVID pandemic, and fell exactly midway between the COP26 and COP27 negotiations.

The Global Platform offered a broad and diverse array of plenaries, side events, workshops and high-level dialogues, and one key trend became clear: the DRR community is embracing its role in scaling up climate action, while recognising the challenges in connecting with other key stakeholders including the climate and hydro-meteorological communities.

To help implement the 2015 Sendai Framework, UNDRR launched the Words into Action (WiA) Guides in 2016 as a series of guidelines developed based on inputs from global experts, communities of practice, and networks of DRR practitioners. The guidelines provide practical, specific advice on implementing a people-centered approach to DRR in line with the Sendai Framework.

Over the last few months, UNDRR and its partners drafted a new WiA guide with special focus on Multi-hazard Early Warning Systems, to provide practical guidance to the implementation of the Sendai Target G. This WiA Guide aims to provide advice for governments, stakeholders, and partners on how to institutionalise, operate, monitor, and strengthen people-centered inclusive approaches for multi-hazard early warning systems.

UNDRR took advantage of the 2022 Global Platform to get concrete feedback on the draft. While the first section focuses on supporting hydromet services in establishing and sustaining effective early warning systems, the following chapters offer concrete illustrations of early action and guidance on the measurement of the resulting mechanism’s effectiveness.

The Climate Risk and Early Warning Systems (CREWS) initiative is a mechanism that funds Least Developed Countries and Small Island Developing States for risk-informed early warning services, implemented by three partners (the World Meteorological Organization (WMO), the World Bank and UNDRR). The CREWS initiative aims to help close the funding gap by building on existing investments, leveraging additional funds and improving effectiveness. And it requires that investments are co-developed and driven by the needs of those dependent on timely and accurate warnings and climate information, especially vulnerable people.

The 2021 CREWS Annual Report was launched on 24 May at an event to accompany the 3rd Multi-Hazard Early Warning Conference, which took place as part of the preparatory days for the Global Platform. The launch highlighted the initiative’s commitment to scale up support for those on the frontlines of the climate crisis, recognising that a third of the population living in Small Island Developing States and 60% of people living in Africa still do not have access to early warning systems. It is also aligned with the advocacy of civil society networks, such as the IFRC or GNDR, to make climate science, and more specifically climate-related forecasts, work for last mile communities.

This is why the development of a new resource focused on the end users of early warning systems, the CREWS Operational Procedures Note No 4: People-Centered Risk-Informed Early Warning Systems, is such a timely contribution, outlining the rationale and the steps required to transition to a more people-centered risk-informed approach by encouraging collaboration between local level actors. It recognises that people-centered, risk-informed early warning systems require a level of integration across all sectors, with strong gender considerations. This Operational Procedures Note, to be adopted in the coming months, will also provide an added resource for continuous documenting and learning, both within CREWS operations and with other development partners.

A third resource that contributes to the global discussion on scaling up forecast-based climate solutions is the Green Climate Fund (GCF) Sectoral Guide on Climate Information & Early Warning Systems (CIEWS). This resource aims to guide proposal development for the GCF in line with its investment criteria during its first replenishment period 2020-2023. The draft guide was developed through a consultative and collaborative process with technical experts from the sector.

As part of the formal GPDRR proceedings around early action, a slide deck of the GCF’s Sectoral Guide was included in the Global Platform resources and a consultation process took place in parallel to the conference. The Guide is aligned with the Sendai Framework Target G and will ultimately benefit the same climate-vulnerable countries – and specifically the national and regional meteorological and hydrological services, as key stakeholders in generating climate information services.

As with the WiA Guide, this resource first aims to strengthen the foundations of early warning systems, i.e., quality climate information services centered around the national hydromet actors. However, the GCF Guide’s Pathway 2, “Promoting impact-based MHEWS and early action”, delves deeper and provides a helpful financing perspective to complement the WiA and CREWS resources. Of critical importance for the scalability of early action in coming years, it outlines how GCF funding contribute to “making people-centered, end-to-end, and impact-based early warning and action services widely available.”

4. Generating political momentum: The UN’s ‘Early Warning for All’ Initiative

On 23 March 2022, in the context of World Meteorological Day, the UN Secretary-General Antonio Guterres announced that the UN would spearhead a new initiative to ensure every person on Earth is protected by early warning systems within five years. Two months later, the 3rd Multi-Hazard Early Warning Conference (MHEWC) reiterated that effective early warning systems are an essential element of disaster risk reduction.

The conclusion of the Global Platform, the Bali Agenda for Resilience,acknowledged the importance of the United Nations Secretary-General’s call and reemphasised the need to “consider the end-to-end people-centered early warning value chain – from risk assessments to infrastructure and community last-mile outreach”. With this renewed endorsement, WMO is now working with donors and key development partners (and organisations interested in contributing) to conduct a mapping of global early warning system development efforts over the next five years and identify critical knowledge and operational gaps. It will present an action plan in November 2022, at the next UN climate conference (COP27) in Egypt.

Connecting the dots and moving forward

In its Early Action: The State of Play 2021 report, REAP recommended that the international community (1) “increase collaboration, coherence and understanding between key actors and communities involved in the early action agenda” and (2) “develop clear policy recommendations regarding the various funding sources and financial instruments that are available or able to support risk-informed early action”. The Words into Action Guide for Multi-Hazard Early Warning Systems, the CREWS Operational Procedures Note 4, the GCF Sectoral Guide on CIEWS and WMO’s mapping and planning exercise under the UN’s ‘Early Warning for All’ initiative each contribute to this collective effort for greater coherence, understanding and funding for early action across the climate and DRR communities.

Key pieces are gradually falling into place, but last mile early action is still elusive in many contexts. The 2022 Global Platform strengthened the bridges across the DRR, climate and hydromet communities, but it also helped flag how parallel discussions are taking place on very complementary issues, with limited awareness or understanding of the connections and potential synergies. Now is the time to bring all committed parties to the table ahead of COP27.

Read the original story here
Share this
Also featured on